At CBS.  Remember things like this from back in the ancient days:

See that?  Age appropriate only.  Nobody does transgender surgery on minors.  That's what news outlets said when a story broke that a children's hospital in Boston was doing just that.  Local media circled the wagons (national media did it's part and largely ignored the story).  Fact checkers assured us nobody performs surgeries on minors.  Ever!

True, can anyone really know what a kid is?  I mean, fourteen might just be an old geezer at this point.  You never know with the modern Left.  Anything could be true, or false, or both or neither. It's that easy.  So easy, this passes as an argument worth quoting in a major US news outlet: 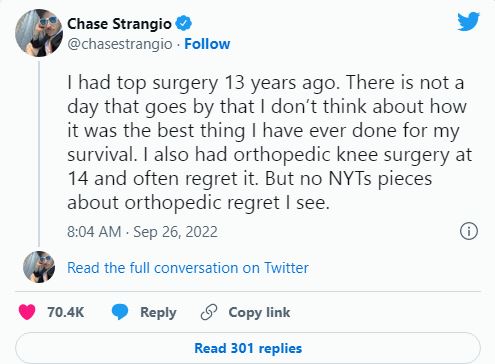 When I see the horrors of this unfolding, the absolute lack of resistance by any institution or leaders, and the lies and duplicity needed to advance it, I remember a few things.  One that leaps to mind is this:

You belong to your father, the devil, and you wan to carry out your father’s desires. He was a murderer from the beginning, not holding to the truth, for there is no truth in him. When he lies, he speaks his native language, for he is a liar and the father of lies.  John 8.44

Email ThisBlogThis!Share to TwitterShare to FacebookShare to Pinterest
Labels: deals with the Devil, The evil the Left does