A lament for Ireland on this St. Patrick's Day 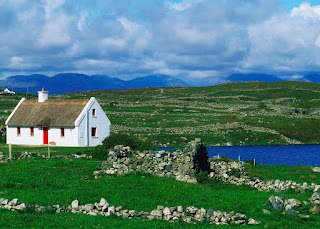 Unpacked here, with not a few tears.  Not all is hopeless, of course.  With God, after all, everything is possible.  Nonetheless, few places on Earth have seen a faster or sharper decline in dedication to the Gospel of Christ than Ireland.  As recently as 1990, Ireland was one of the last bastions of Christendom left in Europe.  That, of course, wasn't saying much.  Nonetheless, it was enough that old VCR tapes we have about Ireland dating from the mid-90s could still boast of Ireland's deep devotion to the Christian Faith of St. Patrick.

Now, like so much of the Dead West, Ireland is a spiritual and moral wasteland.  A country immersed in the pointlessness and hopelessness of the secular world, where this life is all you get, and you had best scramble for whatever scraps of pleasure you can get at whatever the cost.  And like most nations that have so moved, the result has not been one of a Utopian paradise of peace, love, joy and John Lennon songs.  Instead, like we see here in the States and other post-Christian European countries, it's like a party where everyone is bored, nobody cares, the beer is gone, and yet not a single solution for livening things up seems available.

Far be it from me to heap praise on the Protestantism I gave up so much to leave, but sometimes it's those remnant few Protestants who are keeping the torch of the Faith alive in Ireland, just like here in the States, when so many others are simply fading into a vague Jesus shaped secularism with not much more to offer than the sparse materialism of our atheistic age.

"Because there is no other God, nor ever was, nor will be, than God the Father unbegotten, without beginning, from whom is all beginning, the Lord of the universe, as we have been taught; and His son Jesus Christ, whom we declare to have always been with the Father, spiritually and ineffably begotten by the Father before the beginning of the world, before all beginning; and by Him are made all things visible and invisible. He was made man, and, having defeated death, was received into heaven by the Father; and He has given Him all power over all names in heaven, on earth, and under the earth, and every tongue shall confess to Him that Jesus Christ is Lord and God, in whom we believe, an whose advent we expect soon to be, judge of the living and of the dead, who will render to every man according to his deeds; and He has poured forth upon us abundantly the Holy Spirit, the gift and pledge of immortality, who makes those who believe and obey sons of God and joint heirs with Christ; and Him do we confess and adore, one God in the Trinity of the Holy Name."
The Irish Creed of the Trinity

Posted by David Griffey at 1:30 PM

Email ThisBlogThis!Share to TwitterShare to FacebookShare to Pinterest
Labels: Decline of the Christian West, Reflections