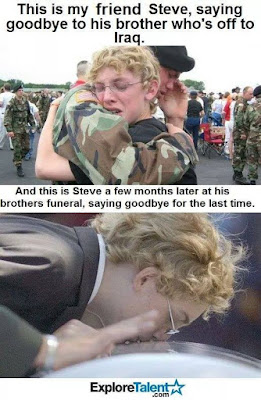 We may be the first generation that doesn't think wrongly about war as much as we just don't think about it.  Like AIDS, economic floundering, terrorist attacks and other maladies of the modern world, as long as it's someone way over there who is doing the suffering, it's a sacrifice we're willing to ignore.  Whatever you may say about times a'changing, I can't bring myself to think that this is a positive development. Especially when placed in juxtaposition to those who actually live what true sacrifice and humility is all about.


"Greater love hath no man than this, that a man lay down his life for his friends."

*I was unable to verify the authenticity of the pictures, but even so, what they represent is real and speaks volumes.
Posted by David Griffey at 10:43 AM