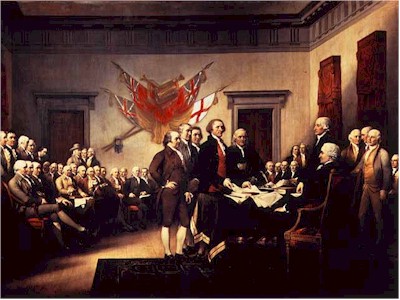 May you live to see your tricentennial.  For all its failings, for all its missing the mark of its own lofty standards, it's still been one of the greatest single undertakings in human history.  Today, as so many seem eager to put a stop to everyone else's liberties, as our place in the top spot of the world seems threatened, as the population continues to lumber on like so many extras from the set of The Walking Dead, I'm still optimistic that this country can survive.  Put me in that camp of Catholics who see America as a great nation, whose greatness is threatened only by the lax example and compromising that defines so many Americans, including Catholics.  While those conservatives are not immune to failing - I'm thinking torture in recent years - I've not given up hope.  But that's because the alternative, the post-modern progressive movement, which promises, for the time being, freedom for hedonism and oppression and censorship for everything else, is the single greatest threat to our freedom that we've faced since 1780.  So happy birthday America, may your citizens wake up and realize that by focusing on the bad for all these years, we've set the stage for losing anything that was ever good, and once lost, it will not be recovered easily, if ever again this side of heaven.
Posted by David Griffey at 3:58 PM

Email ThisBlogThis!Share to TwitterShare to FacebookShare to Pinterest
Labels: Holidays, The Decline and Fall of the American Dream