Fun is the one thing that money can buy

With all due respect to The Beatles. 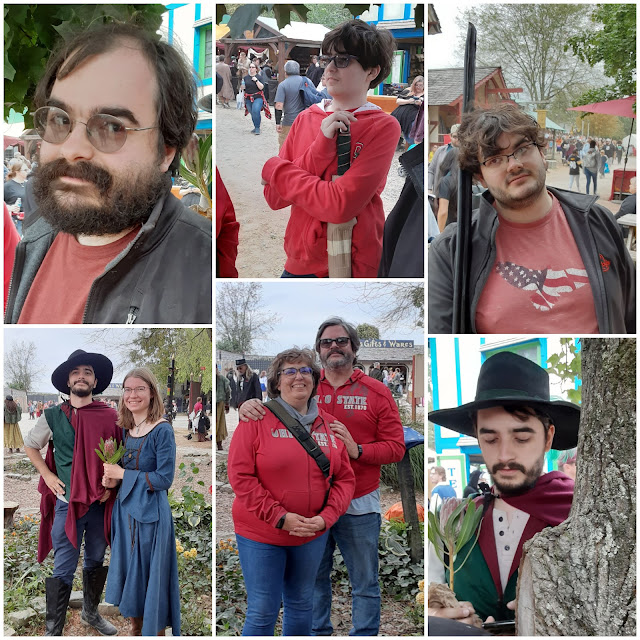 And buy it did.

After several years of hiatus, we took the family back to the Ohio Renaissance Festival.  We first went there the year our third son was born.  Back then it was a smaller affair.  A few thousand were in attendance on most days, and much of the grounds was empty and spacious with plenty of room to stretch out and enjoy.

This time, however, there was an ocean of people.  If you told me 30,000 were in attendance I'd believe you.  It made it a bit tough.   You had to arrive at events an hour in advance if you wanted anything close to good seating.  Additionally there was no room to do anything.  Even a formerly large open commons area was now cluttered with booths and stalls, with thousands gathered and sitting anywhere they could. So bad were the crowds that we didn't even eat our obligatory faux Medieval helpings.  The lines to the concession areas were in excess of an hour each.

We don't know why it was so crowded, other than it was the first year the festival was back in full gear since Covid.  In 2019, the last year we went, it was already getting crowded.  We commented then on the diminishing space and time available due to the crowds.  After all, it now is big enough for full television spots and heavy advertising the season through.  When I first heard about it when we lived in Louisville in the mid-90s, I had to scrounge to find any information (which is why it wasn't until 2000 that we went). But this year? Nothing before came close.

Nonetheless, despite it all, we had as good a time as we could.  The jousting was good, though one of the jousters seemed a little under-par in terms of abilities.  The Swordsmen (Bold and Stupid Men!), one of the headline acts from the beginning, were as fun as ever, though they're obviously showing their age.  I told one of them (Dirk - the Daring!) that we first caught their show the year our third son was born - pointing to  our hulking son behind me.  He thanked me for the reminder of time's passing.  We do believe they intended to wrap things up on their 30th anniversary (which would have been 2020).  In 2019, they emphasized more than usual that everyone must come back for their big tour in 2020.  We assumed then they were retiring.  Now I'll bet they're going until their 35th year and then will call it quits.  Again, it's not hard to see the difference from over the years.

We caught a new act, some Moonie fellow who juggled and did various tricks.  It was made better by an audience member he pulled up on stage. If that audience member wasn't a plant, then he needs to join the act.  Never have I seen a random audience member steal the show like that (at one point the performer sat down with the audience and told him the show is his).

There was shopping and browsing of course, but again always pressed by the crowds.  Plus my wife still has her limits on what she can do in terms of exertion.  The big bonus this year was bringing our son's fiancée to the festival for the first time.  Despite the crazy crowds she seemed to have had a splendid time.  That was our hope.  The rest of us certainly enjoyed it, and the usual souvenirs, handmade leather pouches, and authentic swords were purchased.

Our youngest and oldest bought display swords, and our second oldest bought some fancy leather pouches for his expanding costume.  I, for one, come dressed as a middle aged Ohio State football fan - the extent of my cosplaying. Though my wife has hinted she wouldn't mind dressing up.  If she does, then it will be a Medieval themed lass walking about with a middle aged Ohio State football fan.  For the moment, she and I were content with two souvenir soup bowls.  I guess we're at that age.  My third oldest, of course, had to go all out and buy a massive two handed sword along with a handmade leather sheath.

After a brief walk through a very dilapidated maze, and some taking in of the sights, as well as throwing of the knives, we called it a wrap.  My wife was tired and food was needed.  In keeping with the Medieval theme, we finally stopped at a Pizza Hut on the way home.  All in all, a fine day and a good one.  I won't say it was like old times, because it wasn't.  But it was new old times with a soon to be new member of the family, and that's not bad at all. 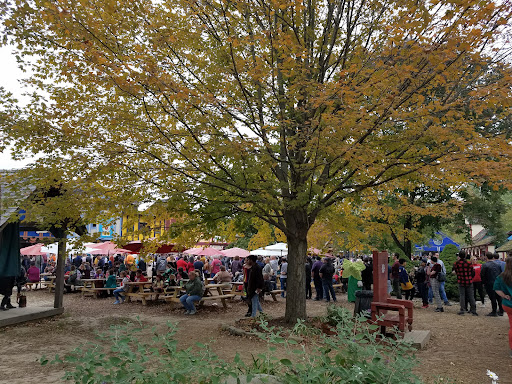 No Renaissance Festival should ever be attended outside of Fall.  The weather was nearly perfect: clouds enough to keep the sun from baking us, cool enough for jackets but just enough warmth from the sun to keep us comfortable. 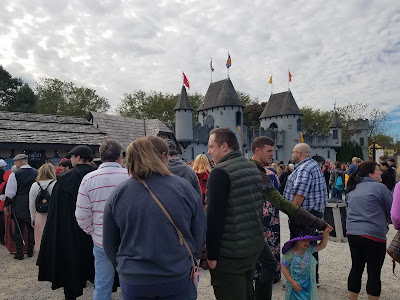 A portent of things to come.  It took us almost 25 minutes to get in the gates, and that was after arriving a half hour after opening.  Usually by then you just stroll in. 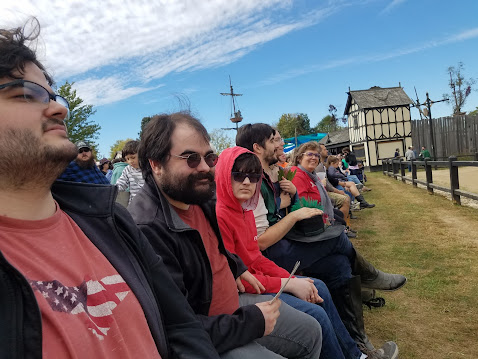 The family ready for the first event of the day, and the ultimate crowd pleaser: The full armor joust

My wife caught this shot of the two more capable riders approaching each other. 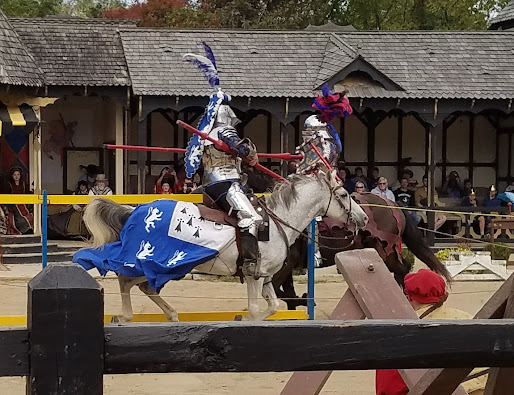 In the next round, I caught the two at the moment of impact. 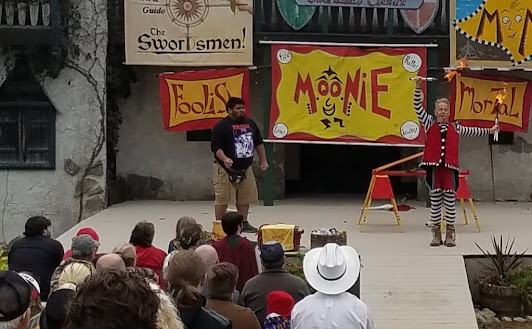 We saw this show waiting for the Swordsmen.  We had never seen him before.  His humor wasn't always G-rated (but then it often isn't at the festival).  He was impressive, but more impressive was the audience member (in the black t-shirt) he pulled up on stage.  We call that a spotlight stealer. 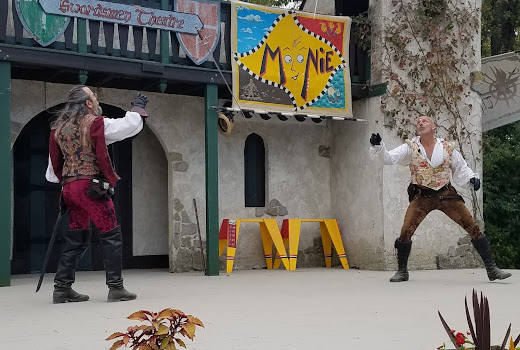 The Bold and Stupid Men!  The Swordsmen were so popular the stage was named for them.  They have been one of the main draws there (and at other similar venues) since the 1990s. Alas, they do less now, owing to the passing of time.  Far more joking, though there was more swordsplay than in recent years. 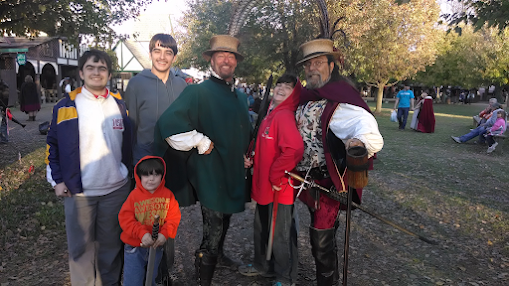 For reference, this was the Swordsmen with the boys almost ten years ago.  Again, time does pass. 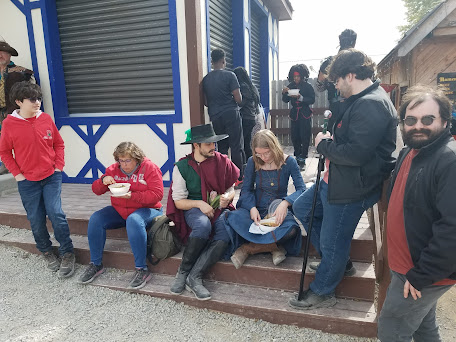 For food it was a couple bowls of ramen for those who couldn't wait, and sit where you can find a place.  The ramen had several degrees of spice.  We ordered the least spicy.  One bite and my mouth burned for half the day.  I can't imagine what the spiciest was like.

Don't let the forlorn image fool you.  Our oldest is the official keeper of the family traditions.  Not that the other boys don't care, but he's the one that moves heaven and three earths to make sure the Griffey family traditions are kept and maintained through the years.

They were supposed to be smiling for the camera, but a passerby decided to intervene and steal the show, so to speak.  Kudos to a couple of the boys for trying to keep their composure and ignore the distraction.

This was the culprit.

The theme of the weekend was dress as your favorite fictional character.  So naturally an entire troupe of individuals came dressed as every Dr. Who since the beginning of the show. It wasn't tough getting them to pose.

While my oldest stayed back with my wife, the others tried their hands at knife throwing.  I think one hit somewhere on the wall.  The one time my wife tried her hand at knife throwing, on the other hand, yielded a bull's-eye right out of the starting gate.  I suppose that says something about raising four sons. 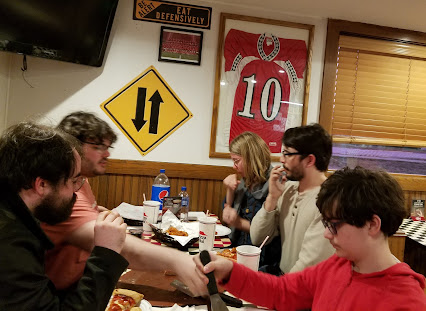 There's something relaxing about pizza at a pizza place after a long, albeit enjoyable, day.  It didn't hurt that the manager showed the right way to make a restaurant awesome, even as it struggles with the whole post-pandemic upheaval so many businesses are dealing with. 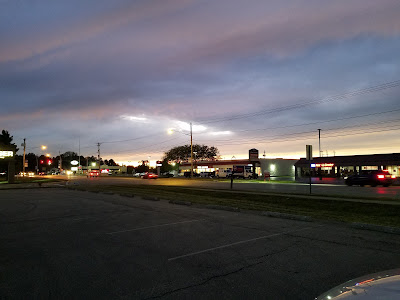 And so the sun set on another Griffey outing.  It was fun and we made memories, which is the stuff that matters.  Plus, we had someone extra join us this time, and the day was all the more enjoyable because of it.
Posted by David Griffey at 6:30 AM