When news came that San Fransisco will be voting to ban the religious practice of circumcision, still an important part of Jewish and Muslim religious practice, cries of antisemitism filled the air.  Not so, proponents of the ban insisted.  It was simply an attempt to impose our values eliminate a painful and medically beneficial unnecessary procedure.  Of course that many such proponents would not think twice of allowing the same babies to be aborted a few months earlier seems to escape some, but that's beside the point.

No, it is all about those precious post-delivery babies!  Now, the post-modern Left is all about bigotry, censorship, oppression, and dangling debauchery and decadence to increase support for the cause.  That line between the 'Left' and 'Liberals' is sometimes a bit fuzzy.  When Joe Lieberman went Independent a few years back, many became concerned that there seemed to be a bit of classical antisemitism coming from the Democratic side of the aisle.  Republicans, sure, we know they're racists.  But these were Democrats throwing this around.  Some began to get the idea that we were seeing the seeds of a new racism, a new bigotry on the horizon.  Others insisted you can't blame the whole Left for the actions of a few (unlike blaming all Republicans, Conservatives, Christians, and other traditionalists for the actions of a few).

Enter the San Fransisco circumcision ban.  Despite protests to the contrary, many are starting to see this as a clear attack on traditional religious practice in general, and an attack on traditional Judaism and Islam in particular.  And while proponents insist nothing of the sort, suddenly we have this: 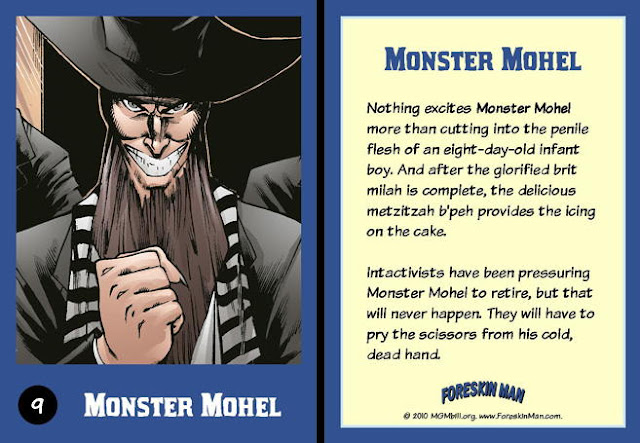 WTH?  Monster Mohel?  Complete with hook nose and 1930s era Nazi like antisemitic imagery?  And the hero is a blond haired, blue-eyed crusader against the evil Jewish caricatures?  My first thought was, this had to be published by opponents of the ban to make the pro-ban gang look like Nazis.  But as of now, I've seen nothing of the sort, and it actually looks like it was published by the pro-ban side.  Egad.  I'm still holding out hope that something this flagrantly antisemitic is not part of an official legal campaign in our country, and it is a hoax or something along those lines.  But I must admit, part of me is concerned. Even if it is official, I'm sure it doesn't represent everyone who supports the Ban.  But the fact is, that this sort of thing is attractive to that particular brand of hate-based bigotry and tyranny that is emerging from the far Left side of the tracks. I've said it before, if anything is capable of surpassing the evils of the Nazis, it will be the post-modern secular Left.  And that's worth remembering for everyone involved.
Posted by David Griffey at 10:19 AM