A blast from the Cold War past

You know society sucks when you hear people start reminiscing about the good old days in the Cold War.  Though, in fairness, when I hear people do that - and I have in recent years - they usually mean the 80s.  Now 1980 is when I first became interested in politics.  In fact, I initially thought of going into politics (behind the scenes) in college, but decided I didn't have the dorsal fins for that living.  Still, I became interested because of the rhetoric I heard about Ronald Reagan.

You see, it's not just today.  Heated rhetoric, demagoguery.  These things didn't pop up because of the Internet or Facebook.  They've always been there.  And back then, while official political commentators may have couched their language,in restrained terminology, there was an undercurrent among more hyped up pundit sources that Reagan was, like all Conservatives, a wacked out warmonger who was going to nuke the world.

We were already skating on precariously thin ice by then.  After all, by Carter's time, we had settled in on detente. And that manifested itself as two powers able to destroy humanity forever facing off until someday they inevitably destroyed humanity.  Reagan was going to put an end to it.  But the Left, of course, saw this as he was going to destroy the world.  So while the 50s and 60s believed that a nuclear war could happen at any moment, in the early days of Reagan, the talking heads told us it would happen at any moment. Better go get laid now.  You won't have another chance.

I've often wondered if that was a reason that my generation was so impatient.  At a formative point in our lives (middle school, early high school), people who were supposed to be credible were spinning scenarios in which our doom was inevitable, and soon.

Anyway, much to the disappointment of Reagan's detractors, by 1985, two things hadn't happened.  The economy had not collapsed.  In fact, it was rebounding better than it had in over a decade.  And we were still here.  He hadn't caused the nuclear annihilation of humanity.

Now, that didn't stop the detractors.  And today, the liberal media and academia simply dismiss Reagan's role in things, or simply ban mentioning him in connection to the events in any way.  Like it or not, however, things were getting better and we were beginning to believe we might actually come through this long, dark Cold War unscathed.  As a jock student at OSU responded to a professor who lamented our lack of outrage in the later 80s: we're happy.  Things are going well.

So when we reminisce about those old Cold War days, I can't help but notice most mean when we knew we were going to win, and there wasn't going to be an end to humanity.  And like it or not, even for us non-Republicans, we had to admit it seemed to have something to do with Reagan.

Anyway, all of this is to set up what we did last night.  As I wrote here many years ago, it's a ritual for me to lift a cold one, and watch the old 80s comedy Spies Like Us.  Much of it is mocking Reagan and Reagan's conservatism to be sure.  It was SNL alumni Chevy Chase and Dan Aykroyd and director John Landis after all.  The whole thing is a giant mockery of Reagan's fabled Star Wars strategy, which some assume was simply a bluff he used against the USSR.  Detractors, of course, know better. And Spies Like Us is a look into just how the Left saw Reagan, his ideas, and those who supported him.  Comedy though it is, the heavy handed stereotypes of military ready to nuke the world for the American way seemed over the top even then. 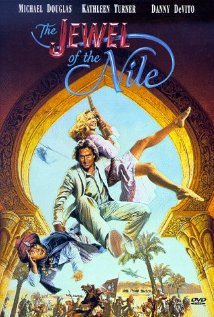 Another movie we watch every year was the sequel to 1984's romantic adventure Romancing the Stone.  The sequel, The Jewel of the Nile, wouldn't be able to be made today.  Not that Spies would either.  In our dark days of censorship and oppression supported by the very institutions that once fought the same, there is much that was that could never be today.

The Jewel of the Nile is what is known as an inferior sequel.  Though Romancing was charged with being a Raiders of the Lost Ark knock off, it was still an enjoyable, and well received, film.  Fresh, with good performances, a fun story line, a nice mix of comedy and action, and three breakout performances with the main stars,

Jewel, however, was half of it a train wreck.  Not all of it.  In fact, there are theories that part of the movie was written and filmed when something went horribly wrong with the lead actors; the rest of the movie ended up being a patchwork thrown together.  There are good parts that hearken to the best of the first film, and other parts that are almost excruciating - bad humor, cheesy, lame, shallow.  Almost as if the actors couldn't' wait to get it over with.  We watch it, for the same reason we watch Spies: because I first saw it after that first quarter of my Freshman year of college, and the good memories that accompany that remembrance.

But it's interesting in thinking about both of these.  They both take place in areas of the world that were, for the most part, unknown in those days.  The Cold War focused most Americans on the USSR, and its European satellites.  These pictures take place in Pakistan, and in a vague, fictional region of the Nile.  So fictionalized in fact, that it would not be able to be seriously made today apart from a Seth Rogen romp without being laughed off the screen.

Yet it showed just how much of the world was still unknown back then, or at least not cared about.  80s though they were, it's amazing how little of the world people knew.  Our sights were to the East, to the Iron Curtain's western borders.  We knew Vietnam, and were aware of Korea, due to the two wars of the same names.  But apart from being aware of Africa and the Middle East in general, I'd wager most audiences then wouldn't have had a view of Pakistan or the Nile regions of Africa to bounce off of the movies' narratives.

And the films no doubt benefit from that fact.  Not that either was particularly well received in the day.  But can you imagine them made today?  And yet, it makes me wonder as well.  How much of the world we think we know will be revealed in the future?  What are those parts that we aren't paying attention to now that will dominate the world of our children and their children?  For instance, many are keenly aware of the plight of Christians in the Middle East in light of our Iraqi invasion.  But how many are aware of the plight in other areas of the world?  Is there plight in other areas of the world?  Heck, what other parts of the world are we still ignorant of?  It isn't as if we hadn't heard of Pakistan or the Nile Valley.  But we knew so little, a movie could say what it wanted, or even make up an entire fictional region, in those crazy, hazy mid 80s, and most audiences simply would have moved on and not noticed or give it a second thought. Try it in Pakistan or the Nile Valley today, in light of Isis and Islamic Terror, and see how it would be received.  Just a thought after one of our yearly rituals comes and goes.
Posted by David Griffey at 12:38 PM