Well there goes my bracket! 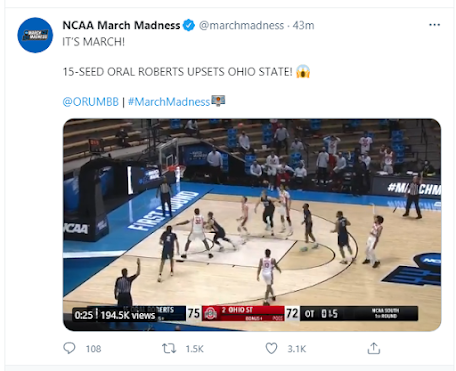 Oral Roberts?  We lost to Oral Roberts?   Does our team know how that makes a person of my generation feel, losing to underdog Oral Roberts at the outset?  Thanks goodness it's now I suppose.  If it was forty years ago I wouldn't be able to handle the jokes.

Ah Holtmann.  He manages to make silk purses out of sows' ears, and yet can never seem to sell those purses he made.  He will win early in the season against overwhelming odds.  And then, somewhere halfway through, the wheels start coming off and it seems as if he plays down to anyone he plays.  Put us up against a middle school team, and we'll barely scrape by.  That 'win at the edge of your teeth is sill a win' philosophy can only last so long.  Eventually it will catch up with you and that's what happened today.

Oral Roberts beats OSU in overtime (and an overtime we had to catch up to and tie to get to).  Geeesh.  I suppose at least I don't have to sweat the rest of my bracket.  Warren Buffett can rest easy where I'm concerned.

Posted by David Griffey at 6:06 PM