The New York skyline as I remember it 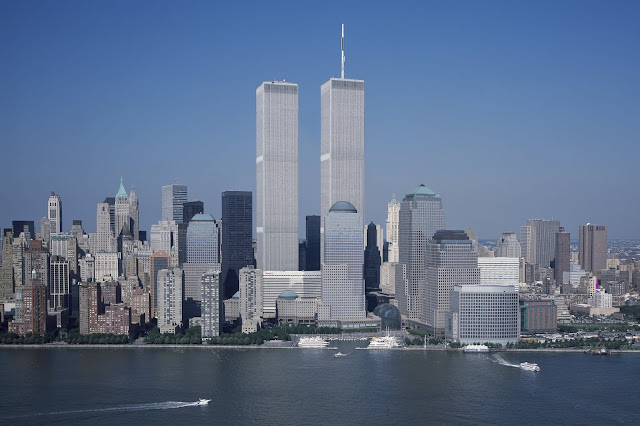 True, the Twin Towers were built after I was born.  But I was so young that for my life they symbolized America as the economic center of the world.  Along with the United Nations they showed us as the captains of the Free World, and a hub of activity around which the world rotated.

That is no more.  The terrorist attacks were devastating, and exposed a cancerous growth in the world; an alliance between the emergent Left and any other country that would see America brought down from its perch, if not eliminated altogether.

It's no surprise that the political Left, within weeks of the attacks, began turning their attention, not toward fighting the terrorists, but making sure GW Bush didn't capitalize politically on the obvious boost the attacks would bring him.

Since then, it's been an eclipse of the American Experiment, as the whole of the Christian West is put under the test and declared guilty with no hope of redemption.  In that, the terrorists made a brilliant stroke against their adversary, the United States.  So far, it's been they who have been the victors - at least in the long term.

Nonetheless, as we awoke on this date 18 years ago, despite the uproar from the 2000 election, and charges of stolen elections and calls to eliminate the Electoral College, and accusations of political corruption as always, most imagined that the Towers would continue to symbolize America's unique place in the world for generations to come.  Who would have known then that we would be looking at the call to end nations in general, led by celebrities, politicians and popes, including the end to the American Experiment?   I know I didn't.
Posted by David Griffey at 6:00 AM

Email ThisBlogThis!Share to TwitterShare to FacebookShare to Pinterest
Labels: Anti-Americanism, Social Observations, The Decline and Fall of the American Dream