I haven't done one of these posts for some time, owing to business and just scraping by.  But thought I'd throw out my own humble opinions. Now Easter is not like Halloween or Christmas.  It's a little better than Thanksgiving in terms of specials.  Thanksgiving is a barren wasteland, unless you're into modern takes in which sadistic genocidal barbarians sweep into a veritable paradise peopled by godlike beings, any one of which could easily die for the sins of humanity.  If that's not your cup of tea, you have to go back and dig, or settle for football.

But Easter, while not as filled with options as the first two mentioned, still holds its own.  The 1950s were especially plentiful for Hollywood spectacles trying to unpack biblical themes.  Some were hits, others misses.  All were designed to sway people away from that new invention that was luring them into their living rooms and away from the movie theaters.

Other specials have come and gone.  And you always get the media's yearly nod to heresy as a gift to the Christian faith that the media despises.  But these five are the ones we try, if possible, to see every year.  No matter what, we watch The Ten Commandments.  And my love for that movie has been documented elsewhere.  Jesus of Nazareth, a mini-series from the dawn of mini-series mania, is too long to watch in one setting.  But we try to see the last parts of it dealing with the Passion Week. There are others I could have listed, but these five we will see at least every couple years, if not every year. 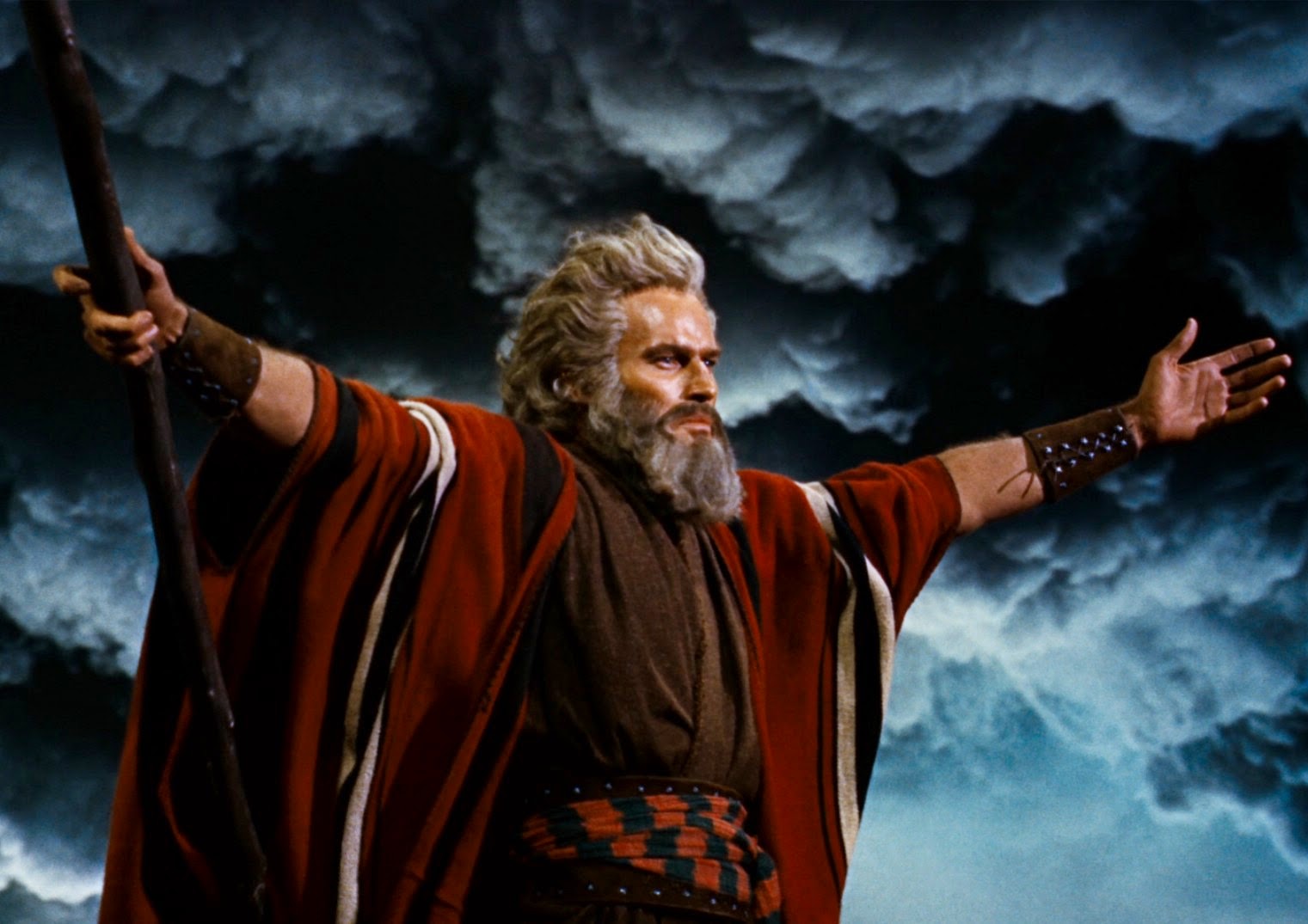 Well done ABC for continuing the tradition of showing this magnificent extravaganza, just like it did when I was growing up.  As a kid, I didn't pay attention to most of the build up.  But once the plagues begin, I was glued to the set.  Of course there have always been detractors, but as I take account of just who those detractors are, I come to love and admire the film all the more.  It's entirely kid safe.  And for my money, a film that bludgeons me with the message 'human slavery is bad' is a damn sight better than one that joins the modern bedrock of future genocides with the message 'we need to eliminate the surplus population to save the planet!' Read here for a more detailed take. 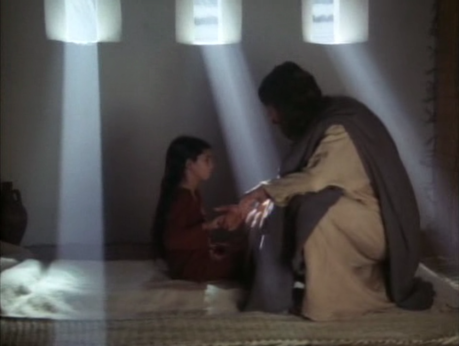 Released the same year as the groundbreaking series Roots, Jesus of Nazareth has weathered the time a little better.  Roots was heavy handed, and the preachiness was at times a little over the top, even if the evils of slavery needed to be shown.  Still, it was in the early days, meaning that Hollywood was still finding its way with this new form of production.  But despite the earliness of the series, Jesus of Nazareth still looks fresh more often than not.

Probably no other series has the proportional star power.  Just about ever person is an A-list character actor or even A-list actor, period.  James Earl Jones, Micheal York, Peter Ustinov, James Mason, Lawrence Olivier, why the list is endless.  Zeffirelli's cinematography is breathtaking, the music stirring, and the series takes pains to make sure that some classical paintings and artwork that Christians would have known make their way into the composition of various scenes.  You can almost hear Pilate say, "Ecce homo!"

Yes, it is a 'low fantasy' version of the Gospels.  Most miracles are downplayed, and many of the overtly supernatural stories are eliminated altogether.  Robert Powell's portrayal is of a small, mystical savior, very human, and very frail physically, though in control spiritually.  It also gives Judas an out as the well meaning but ultimately exploited victim of the resident bad guy (played by the always solid and reliable Ian Holm).  Nonetheless, compared to the media's installments nowadays, this is closer to Sunday School than you can imagine.

And some of the all star cast - again probably the most star laden of any series ever - shine in their respective rolls. A few seem miscast it is true.  But Michael York as the Baptist, James Farentino as the stumbling bumbling soon to be leader of the new church, and Rod Steiger's unmatched portrayal of Pilate are the high points of a series just filled with high points. 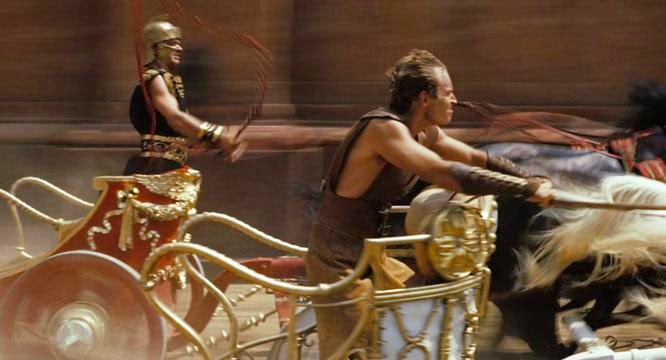 Equaled only by Titanic for the number of Oscars won, Ben Hur is all that the Ten Commandments was, but more refined.  The story is darker, crisper.  The acting more modernized (for that time).  The plot lines and dialogue are more acceptable to the modern palette.  It is sweeping grandeur in every sense of the word.  Not as financially successful as The Ten Commandments, nonetheless it was still the biggest movie of the year, and it earned its Oscars in ways that many feel Titanic never really did.

The story looks like a Jewish story about a Jewish man betrayed by his Roman friend.  But in the end, the finale is squarely on the shoulders of Jesus.  Like The Ten Commandments, the actual biblical story is almost off to the side of the fictionalized plot of lovers and friends.  But where Commandments ends at Sinai, Ben Hur ends at the foot of the Cross.

And along the way, we are treated to a movie that almost takes its breathtaking splendor for granted.  If Commandments seems to stand up and say 'look how awesome this is', Ben Hur just assumes it's there.  That is, of course, until the legendary Chariot Race. One of the greatest action sequences ever filmed, or likely ever will be.  If you see nothing else, you must see the Chariot Race.  Seeing Heston's massive shoulders holding the reigns (he was able to do much of the actual heavy lifting himself during the filming), it's easy to see why he was the go to choice for this era of epics.  An era that would soon pass, but leave a legacy that few films in recent years have come close to matching. 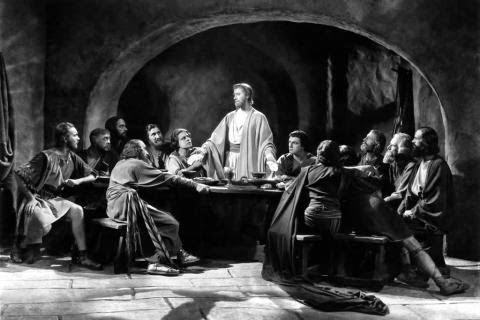 Many years ago, while I was a pastor, this showed late one night before Easter Sunday.  I couldn't sleep, since Easter was always a long, busy day.  We had the sunrise service, and I had to be there around 4:30 AM to get things ready.  And as usual, I couldn't get to sleep.  So I sat up and watched a movie I found out later was the original King of Kings, by a younger Cecil B. DeMille.  Just like his silent Ten Commandments, this was an homage to traditional bible stories without the critical scholarship or post-modern minimalism.

Something about that was strangely refreshing.  Oddly enough, that was one of those things that kindled in me a yearning for a more historical approach to the Faith than I found even in Evangelical Christianity, one that eventually brought me into communion with the Catholic Church. I say oddly, because of course the Catholic Church accepts a modern take on most of the Bible in ways that would shame all but the most liberal theologians in most Protestant seminaries.

Nonetheless, if you get the chance, watch this.  Sit back and see a movie made between the first and second rounds of destruction that industrialization and post-Christian thinking brought by way of the Second World War, the Nuclear Age, and the crumbling of Western Civilization. 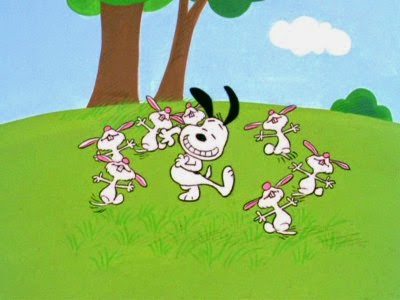 If there was ever need for evidence that Charles Schultz had lost his edge, it is this.  We watch this because there just aren't any Easter specials for kids that don't have weird monster rabbits with metal tails.  Following the course of the seasonal year, this is the fourth and last Peanuts special we watch until the Fall. And how different, and inferior, it is.

Plagued by the focus on the unfortunate character of Peppermint Patty, and an equal focus on Snoopy and his sidekick Woodstock, the special just durps about, bouncing from set up to joke and set up to joke.  Charlie Brown was almost incidental. A series of sight gags with a few strange, tripped out interludes.  Some lame to be sure.  Beethoven plays a big part in the music score, and that helps.

But in the end, it's a special about - nothing.  There is no Jesus, Cross, or Resurrection.  Not even close.  It's as if Schultz was trying to undo all he had done with his first two specials.  For A Charlie Brown Christmas is the Citizen Kane of Christmas specials, and It's the Great Pumpkin Charlie Brown is a wonderfully atmospheric and nostalgic romp through all the stops of an old time child's Halloween dreams.

A Charlie Brown Thanksgiving is still OK.  At least Linus gives a nod to the pilgrims, and recites a prayer, and the theme is finally about being thankful for what we have.  And sharing time with family and friends.  But the Easter Beagle looked like an obligation.  A dashed off afterthought.  One that starts with nothing, leads to nothing, and ends with nothing.  And barely Charlie Brown.

Honorable Mention
The Wizard of Oz 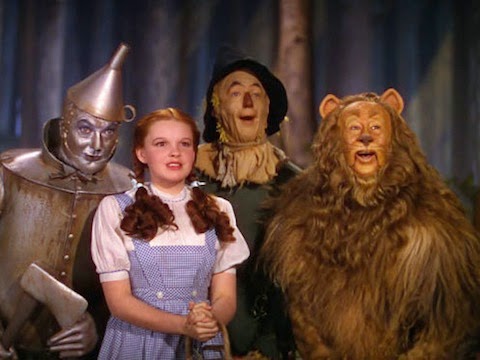 When I was a kid, there were a few yearly events around which we adjusted our annual calendars: Birthday, Christmas, going to Cedar Point, and The Wizard of Oz.  They showed it every year around Easter.  Don't know why.  But to this day, even if I see a showing of it in August or mid-January, I get feelings of spring and Easter bunnies.   Probably the most iconic movie ever made.  It's worth mentioning just because of its awesomeness.  Someday I might unpack why I love it on so many levels.  But for now, it's worth noting that in my memories of Easter and The Wizard of Oz will forever be linked, even if we don't always watch it at this time.
Posted by David Griffey at 3:39 PM