When Washington crossed the Delaware and the Lone Ranger

Steven Greydanus has reviewed The Lone Ranger.  The movie that is, based loosely on Jack Sparrow's exploits as an American Indian in the old West.  Mr. Greydanus and I don't usually see eye to eye on movies, but sometimes he makes some great points about the culture of movies and the world in which they are made.  The point in this review is less about the movie itself, as about our modern culture's tendency to deconstruct and trash our traditional ideas about heroes.  News flash, it's been going on for years.  Which got me to thinking, as I am wont to do.

Back in the day, when I was in school, much of what we heard was how ridiculous and naive those old timers were.  They idolized old, dead guys.  The believed smarmy sentimentality and mythical spins on events and people long gone. They denied the reality of America's past sins.  In short, they had concocted a false reality about our country's past.  About the past of everything.

Symbolism was debunked.  That was a favorite pastime.  Looking at iconic imagery, fanciful reactions, glorifying artwork was a common practice, as one after another the 'real' story was revealed, and the romanticized versions were deconstructed.  Case in point: 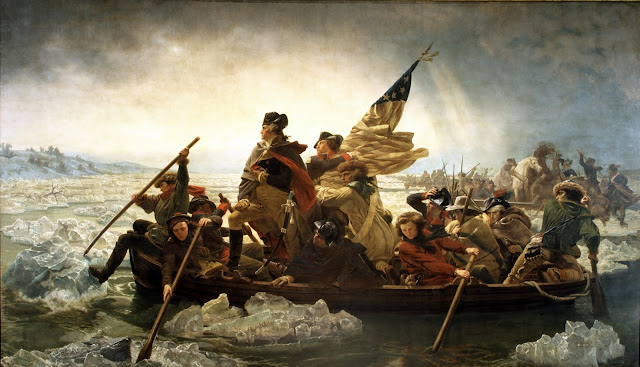 Famous picture.  Does it need an introduction?  Well, today it might.  It's a painting of Washington crossing the Delaware (river).  That is, Washington leading his men in a surprise strike against the Hessian outpost at Trenton on the morning of December 26, 1776.  That's right, just a few months after the Declaration of Independence was introduced to history.  It was painted in 1851 by German artist Emanuel Leutze.

This was a favorite target for our hip, enlightened scholars.  They loved, I mean loved, to debunk the inaccuracies and liberties.  From the size of the boats, to the wrong style flag, to the basic positioning of the characters.  They loved to point out the over-the-top romanticized vision of Washington, explaining that he would never have been able to stand in such a way.  The list of problems was endless!  And I have several books that point it out,  not just to cut Washington down to size, but to reduce that silly, simple generation of naive tribesmen who actually believed such hogwash when compared to our hip, enlightened generation that never buys into idol worship and knows to search for real truth, as opposed to romanticized garbage.

But a couple things have hit me over the years.  One, did people back then think it could have happened?  I mean, there's more likelihood that people in 1851 were acquainted with boats like this than most moderns today.  Did they look at this and say 'gee, it must have happened this way, the painting says so!'?   If they did, it is possible they know something we don't? Plus, as for the inaccuracies, and whether it happened that way or not for that matter, does it matter?  Is it possible that people who looked at, and loved, that painting understood it's actually very accurate, for what it was trying to portray.

For believe it or not, most people don't spend their lives living for scholarly debate or scientific investigation.  This painting, as far as I know, was not meant to be a scientific treatise of inter-coastal waterborne troop maneuvers with historically accurate reconstructions of clothing and battlefield insignia.  Best as I can tell, it was to celebrate what Washington did that night.  What his soldiers did that night.  And what did they do?  They saved the revolution against Britain, that's what.  We know the story.  A year of failures and losses, and most colonials were ready to hang it up and grovel back to mother England.  The service time was up at the end of the year, and Washington was losing support of his men.  He needed to do something, anything to give the cause a jolt.

And what did he pick?  He decided to hit the Hessians, German mercenaries known for their skill and ruthlessness, on the morning of December 26.  They would launch on Christmas day.  They would attack by stealth and surprise.  They would strike against overwhelming odds, in the hope that everything went exactly as it needed to, and chalk up a much needed victory.  And against all hope, they did the impossible.  That's what this painting is saying.  And it's doing it accurately.  Not in scientific detail or scholarly dissertation.  But in art.  In emotion.  Leutze captures the heroism, the bravery, the boldness and decisiveness with which Washington inspired his men.  It's totally accurate.  Not naive.  Not stupid.  Not smarmy sentimental slush.  It captures the reality of the event better than many a scholarly text.  And does so in a way that people would do well to remember.  Life is not an academic treatise.

This isn't simple.  This is insightful.   This is from that age that understood heroes and their values, even if our age doesn't.  This reminds us that accuracy does not alone belong to the world of ivory towers and laboratories.  And perhaps the simplest people of all are the ones who become so obsessed about buttons on trousers or stars on a flag, and miss the greater picture.  Perhaps they want to miss it.  Maybe, they want to deny the greatness or would prefer to reduce the impact and accomplishment because it's easier to tear down the hero.  Or perhaps, they wish to, once again, apply whatever set of standards that excuses the dismissal of America's past greatness, while slyly ignoring such demands on the things that they now want to call great (and having much less of a leg to stand on in the process).  That would certainly explain this: 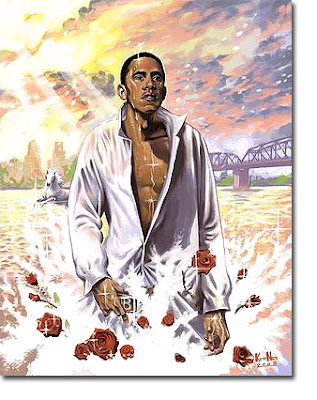