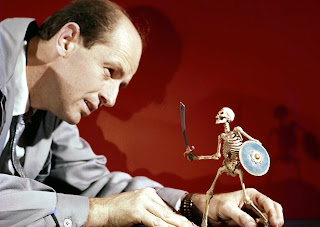 Ray Harryhausen died today.  What kid my age didn't jump for joy when the local station played a Harryhausen movie?  Ours was Superhost's Mad Theater out of WUAB, Channel 43 Lorain and Cleveland.    Sometimes Fritz the Night Owl would have a horror double feature and it just might include something from Mr. Harryhausen's repertoire   But usually it was Mad Theater, a staple of the Saturday Morning ritual that started at noon after the cartoons were done, included two movies with a Three Stooges or Harold Lloyd short, and sometimes goofy cornball skits.

Most of the time these movies were the B to F- type of 50s and 60s sci-fi schlock.  They were never the classic Universal Monster films, though they sometimes tapped into the later Hammer films to add quality.  But every now and then, an odd Movie of the Week or Superhost episode would bring out a Harryhausen, if we were really lucky, The Seventh Voyage of Sinbad, or Jason and the Argonauts, with its peerless battle against the skeletons.

Those were candy to our eyes.  And even after Lucas unleashed his vision of Star Wars on an unsuspecting public, we never lost our love or admiration for Harryhausen.  True, when Clash of the Titans came out we could see it was time to turn a page on movie production.  Still, several of the creatures there retain more depth than many in a CGI blockbuster today.  Does anyone really think the slick animated monsters of the modern remakes hold a candle to the physical menace of Harryhausen's Medusa, or the towering Talos?  I don't think so.

A lot of fond memories there.  Just thinking of it whisks me back to more innocent times, when heroes were good, monsters were bad, and there was simply no reason to loot the fabled and forbidden treasures of the gods, but you knew full well Hercules couldn't resist.  So for all the memories, the fun times, the inspiring tales and unforgettable images, I lift one up and say Rest in Peace, may the Perpetual Light Shine upon you, and last but not least, we thank you.

Email ThisBlogThis!Share to TwitterShare to FacebookShare to Pinterest
Labels: obituary